Starpoint Gemini 2 is one of those titles on Steam Early Access – meaning that it’s a game that’s still being worked on. To put it succinctly: it has a lot of potential.

This is an Alpha Review

Before I get into any more specifics, this is more of a preview than a review. Starpoint Gemini 2 is still in “alpha” development, and the version you can buy on Steam today is version 0.6007; there is currently no sign of a full release date, but considering how done the general gameplay feels, it will hopefully be this year.

With that being said, this review is going to focus on what is currently done well with Starpoint Gemini 2 and point out places that it seems things are still missing. Unless you like playing partially-finished games, I would recommend holding off on buying it until development is a bit further along.

First, I must say that this game is pretty. Maybe not top-of-the-line AAA game Crysis pretty, but it is certainly well done modern graphics. The UI elements are all well placed and (mostly) obvious, and space and the planets, stations, ships, and asteroids all look really well done.

Second, space is fully three-dimensional. While there is a button to align yourself to the plane of the system, there is no forced horizon. This is both a good and a bad thing, since it gives a huge amount of freedom of movement but also makes positioning yourself perfectly along with the camera a little tricky. 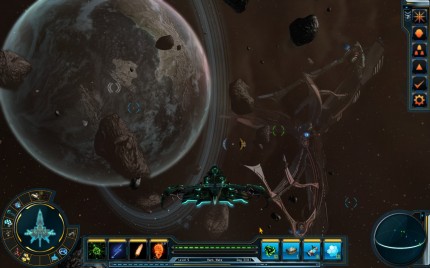 Third, there’s a lot to explore. Space feels big, and there are more things being added to the game in each build. Your ships are very simple to customize with a lot of options, and you can hire crews to increase some stats.

Ships are very expensive. While I can understand there being barriers to getting bigger and better ships, there isn’t enough content yet for money to flow in fast enough to really pay for a big ship. If you want to go for something better than what you start with, expect to spend a few hours mining asteroid fields and going back and forth to the nearest station to sell your (limited) cargo. This could easily be solved in later releases by including missions that pay decently, or at least pay better than spending the equivalent time mining.

Movement feels slow, even when you put all of your ship’s power into engines. This is a problem especially in combat, when turning and rotating your ship is vital to actually attacking properly.

Combat is irritating. Unless you constantly rotate your ship (a rather slow process), you will run out of energy on your primary weapon quickly, and have to switch to your secondary weapons positioned on your left and right sides. I felt that enemies were just slightly overpowered even if they were supposed to be at my “level,” being slightly faster and hitting slightly harder, making it so that I actively avoid getting into fights for fear that I won’t be able to take on more than one tiny ship. Energy for your weapons comes back at far too slow a rate compared to the rate at which it drains, making for a lot of tedious waiting while you are being shot at. 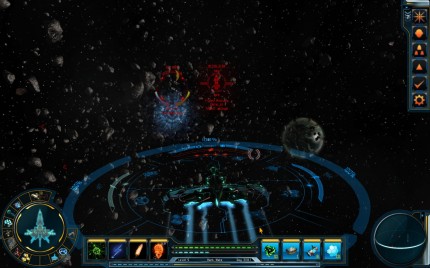 Admittedly, the bad in this game isn’t cripplingly bad. The game is very much an alpha, and it shows. There are occasional graphics glitches and not all of the hotkeys work. A lot of what I said above can be changed and probably will be by the time the game is fully released.

At some point, there will be a faction system implemented. It shows up in the tutorial, but all the randomly-generated missions in the game right now are independent missions and not tied to a faction. There will likely also be a reputation system in place, although I have no idea what it would do as of yet.

The biggest thing that feels missing is a plot. The game clearly will have some sort of plot, and has RPG-style elements such as skills and perks. What that plot is has yet to be programmed in at all, so all the game content right now is flying around space doing random missions or fighting.

And Now For Some Closing Remarks

If you’re looking for a good space game, I would say that this is a game you should pay attention to in the future. As of right now, it’s too incomplete to really say if it will work out, but my hopes are pretty high. Because of Starpoint Gemini 2′s status as an alpha build, I’m not going to give this a review score for the time being, but I’m looking forward to seeing the finished product considering how good the alpha build is already.