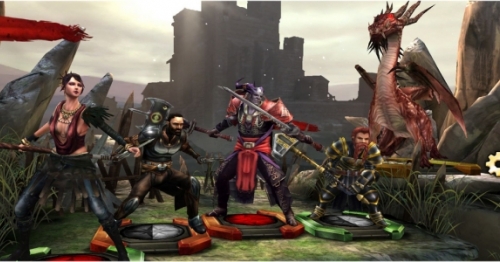 EA and BioWare have announced a new Dragon Age game. No, it’s not Dragon Age 4. Instead, it will be a “freemium” downloadable title for the iPhone and Android devices. Titled Heroes of the Dragon Age, the game allows players to purchase and collect characters from the DA universe, forming them into a team that can do battle against AI and human opponents online.

Instead of adding to the DA story, EA hopes to highlight the game’s rich history, allowing players to create ‘What If’ scnarios involving famous characters from the game’s lore. The title will launch with more than 100 of these unique heroes, each with four potential variations. The studio plans to develop additional characters once Dragon Age: Inquisition lands.

The game is being developed by EA Capital Games, developers of social games such as Superhero City and Age of Champions, who promise that the game will be fair to both paying and free players. They won’t be locking any content off, only allowing you to spend money to increase your odds of getting rare characters.