The revamped game falls into the “freemium” model of games, with the game itself being free, but players having the option to purchase in-app extras, such as improved weapons and special attacks (including those featuring non-playable characters, like the marshmallow fighter “Marshikaze,” a marshmallow special attack that performs a screen-wiping move that destroys all enemy ants, but also sacrifices Marshi’s own life!).

The game begins with Yommy stumbling across a magical jellybean that creates a massive licorice “beanstalk” up to the clouds, where he discovers Pixie Kingdom. The nefarious ant General Zodd has been waiting for this exact moment, and follows Yommy up the licorice to invade Pixie Kingdom. Shortly after Yommy arrives and meets the frosting-topped King Pixie (a cupcake), General Zodd takes several Pixie Kingdom residents hostage. King Pixie asks Yommy to help and so, armed with a candy cane bow and arrow, Yommy aims to stop the ant invasion and rescue the trapped Pixie Kingdom hostages. 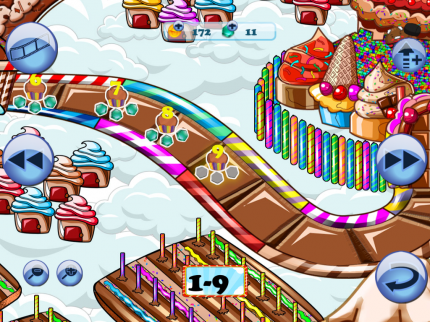 Each world has a map of multiple levels, and you can only proceed to the next level after beating the first one. With numerous levels in each map, however, there is a great deal of playability to be had. After beating a level, you earn both coins and gems, the gems indicating how well you did on the level (up to three). You can purchase more coins and gems from within the app itself, and then use them to upgrade your weapons to kill enemy ants faster, or use special attacks to breeze through difficult levels quickly. You can only access the Blacksmith Alon’s shop for buying weapons, special attacks, and converting your coins to gems after you get past the fifth level in the first map, though there was no dialog to indicate this was the case; I had to figure it out by playing past that point. The same applies for the Cotton Candy Wall special attack, which showed up in Blacksmith Alon’s shop before Level 1-10, but wasn’t available for use until after I had completed that level, even though I had spent gems upgrading it.

One possible bug in this early release of the game involves the placement of the Cotton Candy Wall; when I initially tapped and dragged to place it, the Cotton Candy remained translucent and didn’t get “placed” at all; after some frustrated tapping, I placed it, but at the wrong end of the track, where it wouldn’t do much to block the ants, but did succeed in blocking my field of vision for one of Yommy’s warp points. Luckily, I still managed to destroy all enemy ants before they reached the last line of defense, but I felt as though I had wasted my use of the Wall. When I finally did get to use it for the next level, where ants approach from two levels, it seemed it only worked when you placed it with Yommy behind a warp point; you couldn’t place it further ahead along the track, or between two warp points; you have to wait until you hover the Cotton Candy cloud over a point at which it becomes opaque, indicating you can place it somewhere successfully. You can’t place it anywhere where ants already are; you have to place the wall someplace ahead of them. 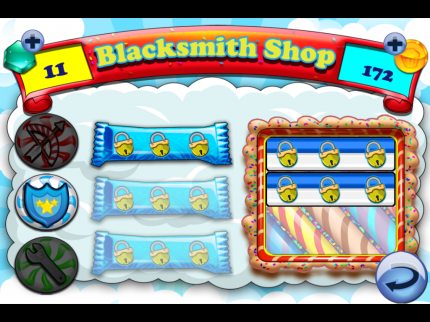 Buying better weapons or upgrading your existing weapons (either their damage rate or fire rate) costs gems, but coins can be converted to gems at a rate of 100 coins for a single gem. Confirming those purchases doesn’t involve any sort of confirmation dialog or sound, so tapping mindlessly once you access the Blacksmith Shop can result in you losing hard-earned gems. This, in turn, means you can either replay levels that you didn’t earn the max number of gems at (for an especially successful victory, with no enemy ants getting past Yommy), or playing additional levels to earn more gems.

As the levels progress, Yommy has more peppermint-shaped “warp points” that allow him to shoot from different vantage points. Initially, it takes four candy cane “arrows” to defeat a single ant, and some ants are capable of parachuting from higher parts of the licorice stalk and getting past Yommy’s initial defenses faster. There are also larger ants that take several more hits before going down, but they are also slower to move across the screen than the normal-sized ants.

With many tower defense-style games, there’s a lot of repetitive motion. In Cake Nana, to mix things up a bit, the game adds a layer of unpredictability by having enemy ants emerge not just from one side of the screen, but also at different points in the background, requiring Yommy to use the warping peppermint points to eliminate them before they quickly get to the defenses. Further, ants can parachute in from both the licorice stalks and from the sky en masse, rapidly increasing the invading forces.

The game is addictive, cute, and generally very fun, especially as Yommy moves throughout Pixie Kingdom and frees more helpful natives that have special abilities.

Whether Cake Nana will prove to be an addicting freemium game in the vein of Angry Birds or other wildly successful mobile games remains to be seen, but judging from the enthusiastic crowds at this year’s Anime Expo, 3½ Samurai Studio is off to a delicious start.

Check out the gallery with more screenshots from Cake Nana, below. 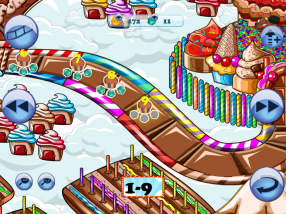 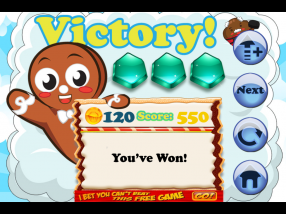 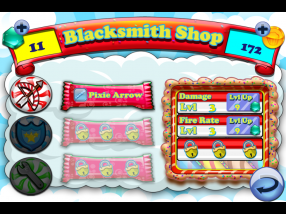 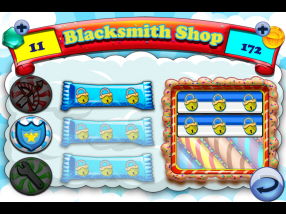 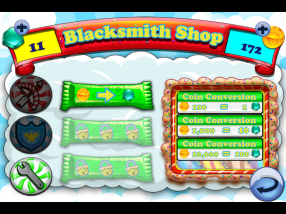