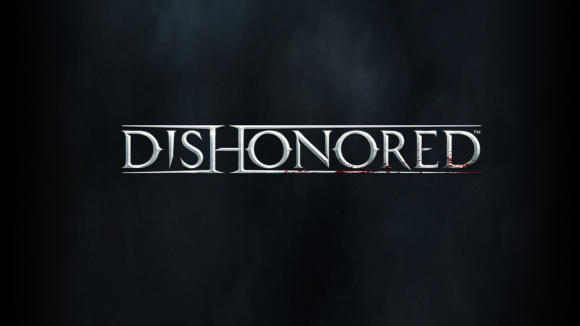 Original IP, “play it your way” mechanics, stealthy badass protagonist and an engrossing story? It’s like they made a game just for me!

The gameplay feels just as good both ways; sneaking and stalking or hacking and slashing.

Dishonored can be hard to describe at times. Stealth action adventure? Action RPG? First Person Platformer? Shoehorned Pidgeon hole? Ultimately the best way to evoke the kind of gameplay Dishonored is going for would be to call it a love letter to the Thief franchise.

Thief is an old game who’s gameplay seems to have been forgotten in the world of stealth dominated by Splinter Cell and Metal Gear. Certain shooters, such as Farcry, Crysis and Goldeneye: Reloaded are made or broken to me based on their stealth mechanics. But these are games about shooting where stealth happens to be a fully supported option. Dishonored is a game about sneaking where murder happens to be a fully supported option. 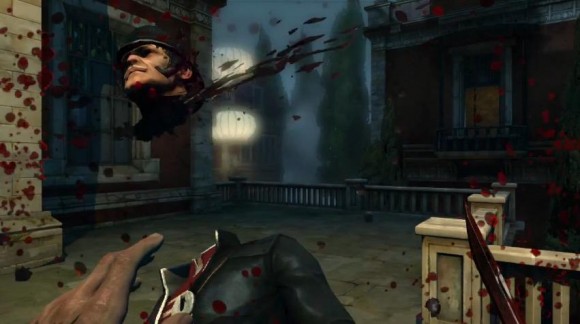 In Dishonored you play as Corvo Attano, the royal guard to the Empress of Dunwall, a fictional city inspired by London during the black plague. The Empress is assassinated, you are falsely convicted, and you join a revolution to expose the true killers and overthrow the usurpers. To do this you must dawn a mask because everyone would recognize your face and a one of a kind cyberpunk dream costume is much less conspicuous. Adopting your new persona as an assassin you must take out high ranking members of the conspiracy and therefore the current government. The ways you can go about doing this may be lethal or non-lethal, and the game allows you a lot of leeway in terms of execution, no pun intended.

Once the story kicks off you get a visit from an immortal being who takes interest in people with great destinies. The Outsider, as he’s called, gifts you magical powers to see that your quest is as interesting as possible. The powers themselves are actually referred to by the game as “play your way” powers, reinforcing rather ham-handedly that this is a game about doing whatever you want. But for a game about doing whatever you want, it does tend to pout a lot when you don’t play it the right way.

At the end of each mission you’re presented with a report card telling you about all the amazing stuff you didn’t do. To truly enjoy this game and play it the way you want, there are a few elements like this you’re just going to have to resolutely ignore. Yes, Dishonored, I know that I missed 1,538 gold pieces in that last mission and there were 2 more priceless paintings I could have stolen and another charm I could have found for my necklace. Yes, thank you for informing me that because 26 bodies were discovered from my last mission the number of guards patrolling this next area has been increased. Now can I get back to playing my game or are you going to guilt me with your “replay mission” button until I go back and do it all over again your way?

Dishonored behaves like a passive aggressive parent telling their child to pick up some extracurricular activities. You’re told everything you could do and should do, given a few narrow options for how to do it, but, oh, do whatever you want sweetie! I don’t want to force you into anything you don’t enjoy. Every time I kill a target I want to reload because I’m not sure I did it right. No matter what I do I just can’t feel like a badass unless I choose to. The game isn’t reinforcing the feeling, it’s criticizing it. The fun is had by dint of my resolve to find my own fun.

Not to say a game must always be fun. Dishonored’s moral choice system, or lack thereof, serves as a compelling narrative of the moral slide toward depravity. Much like in Deus Ex: Human Revolution, I started the game trying not to kill anyone I didn’t feel deserved it, but eventually as the choices got harder and the morality more ambiguous I found myself heartlessly cutting my way through legions of guards ashamed of what I’d become. The game didn’t tell me to be ashamed, or label me as “evil” or “renegade,” but the characters in Dunwall who I thought were my friends began behaving differently around me, feeling cold and unclean when working with me, knowing how dirty this necessary business was going to get.

The crowning achievement of this truly immersive morality system has to be a moment toward the end where one of Corvo’s associates whom I quite liked makes himself a liability because he didn’t like what I’d become. I liked this person, I thought he was right; I didn’t like what I’d become either. But I didn’t hesitate to kill him before he could give away my position. I regretted it, but I felt I had no other choice. In truth I always had a choice. I could have played through the game without harming a single person. And you can bet as soon as those end credits rolled I started a new game intending to do just that. 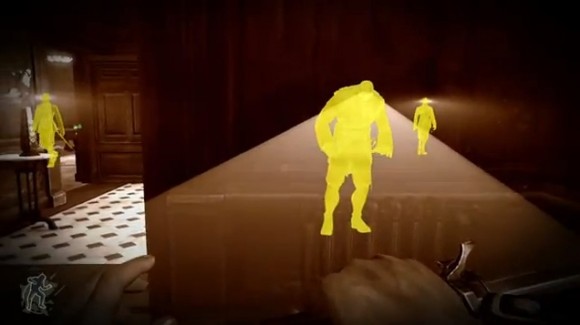 The gameplay feels just as good both ways; sneaking and stalking or hacking and slashing. Enemies are able to dodge and parry attacks just as you’re able to dodge and parry theirs, forcing you to rely on your off hand crossbow, pistol, magic or whatever you prefer to engage multiple foes. Each of these things has a rather limited pool of ammunition making every fight a battle where you never feel like you came away unscathed. Sadly there are a couple of bugs getting in the way of the combat. Enemies have an annoying habit of falling through the ground shortly after death. In a game where the discovery of bodies can make or break you, this seems like a rather glaring oversight. The graphics are standard Unreal Engine with a great stylized aesthetic, but the console versions suffer from an obscene amount of screen tearing during scripted sequences. On the PC this can be resolved by turning on the vertical sync.

Dishonored is a game about temptation. Its tagline “revenge solves everything” is meant to put you into a rationalizing state of mind, excited about being a badass assassin. But then you’re confronted by a world where your choices matter and your victims are people. The subtlety with which the moral ambiguity is presented belies a thought provoking experience. You just have to scratch below the surface and ignore some mechanical relics to get the full enjoyment out of it.