*UPDATE* Controls have since been fixed, HD Graphics have been updated, and compatibility issues have been fixed with new patches.  However, the music still sucks REALLY BAD…

I finally got this game to run.  If you haven’t read my previous article warning you against pre-ordering PC games, then now you have a link to that article as well.

If anyone wants to know whether this is just like Grand Theft Auto IV, then yes, that is exactly what this game is like.  However, that is not to say that Sleeping Dogs isn’t heap loads of fun, if you can get by some of the cheesy story, inconsistencies in cultural bias (to say the least), etc.  It’s just like almost every other sandbox title, but the combat mechanics keep this game from being just another mission to mission grind that gets stale during gameplay.  With the history of development hell behind this title, we’re lucky the developers saw fit to make its gameplay as solid and amazing as it is now at release… with a few minor flaws, but we can get to that later.  United Front spent a lot of time making Sleeping Dogs their killer app, and it shows!

The game utilizes full HD (not shown in my videos, as I have a cheap video card) textures as well as professional voice-over talents featuring Hollywood as well as Hong Kong actors and actresses.

However, those of us who are Asian and/or Chinese may find it a little funny that the game feels more like an Americanized version of Hong Kong gangster movies than they would have liked it to be.  But, with an all-star Asian cast and a setting in a different country that at least attempts to be authentic, I believe that we are taking a step in the right direction!  It’s kind of like when a person co-opts an entire culture as their own and adopts those religions and mannerisms unique to the culture for the sake of being hilarious when they aren’t around.  This game feels like it has a questionable sense of identity that runs a fine line between racism and authenticity, tipping toward the former a little too much, but people accept it because it’s a really nice guy and kind of fun to be around.

Either way, that is just something more or less to laugh at than to take too seriously.  I really adore United Front for the idea of setting the game in modern-day China.  That is leaps and bounds far more creative and game changing than any other studio has attempted so far in terms of cultural dynamics.  Also, any producer that is still saying that Asians aren’t marketable to the general public really needs to stop pigeon-holing races into categories.  Seriously, how many of your men are trying to have sex with our women?  Case in point, why is Emma Stone playing a mixed Caucasian in this game?  I rest my case. 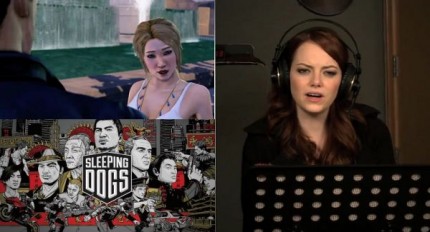 The combat system and driving mechanics are some of the smoothest I’ve experienced in a game so far!  They’re fun without being overly complicated; that is, they don’t bog you down with too many buttons as to be too overwhelming to new gamers.  Sleeping Dogs also features an incredibly intuitive, yet somewhat clunky, control scheme.  Mouse sensitivity is a huge issue at times, and figuring out what a “yaw” is or how to configure it to your liking can be a little overwhelming.  The controls are difficult to map, and the standard W, S, A, and D controls are built into an unchangeable default for you, which can be an issue with left-handed gamers.  In addition, the launch date for Sleeping Dogs saw a slight issue with some button clicks being unresponsive, as well as a few game-killing bugs that made some missions virtually unplayable.  However, the developers were quick to resolve those issues with a patch 4 days later (simultaneously with the European release) which fixed a lot of them for any PC gamers going forward.

While this game doesn’t bring anything new to the table, it is a solid title that does deserve some attention from any fans of gangster movies or videos games.  Environments are colorful and beautifully crafted, and controls are incredibly intuitive, despite their flaws.  The martial arts scheme is a lot of fun to maneuver through and keeps combat interesting, with unlockable moves and a counter system that makes you feel nearly invincible when executed well.

Should you pick up this title?  Yeah, you probably should, if you’re into this sort of thing.  Otherwise, pick up a 2D side-scroller from an indie developer.  Those are incredibly fun, too!