I like my military shooters with a heavy dose of stealth. So why don’t I seem to like Ghost Recon: Future Soldier?

I must remain king of the hill gunning down Russians because according to Ubisoft that’s what fun is today.

I like that Call of Duty keeps pumping money into the games industry, but sometimes trying to compete with the modern warfare theme park causes missteps as is the case with Future Soldier. Tom Clancy’s Ghost Recon series has always tried to distinguish itself from the competition with near sci-fi gadgets and a focus on squad oriented gameplay. But in today’s shooter market these elements have achieved their zenith separately in games like Left 4 Dead, Crysis 2 and Gears of War 3, making Future Soldier feel like a homogenized shooter that fails to find its footing.

You play as Kozak, a member of a ghost spec ops team deployed in what appears to the rest of the world to be peace time. Obviously there are some uppity nations in the middle-east that still require some babysitting, but to anyone in the current gaming generation that is considered peace time anymore. Apparently an op goes bad and another ghost team is killed. This is mentioned sporadically throughout the plot though I never really put together why it was important except that the characters get to say “let’s get the bastards who did this” to occasionally shake the emotionless fog replete through the rest of the narrative. The central plot revolves around a Russian terrorist team working to overthrow the government while your team silently thwarts them and keeps the battle entirely out of the news. While this certainly provides an adequate excuse to send four “ghosts” through a series of varying missions in interesting locales, the game fails so completely at story telling that the levels become some sort of morbid amusement park. 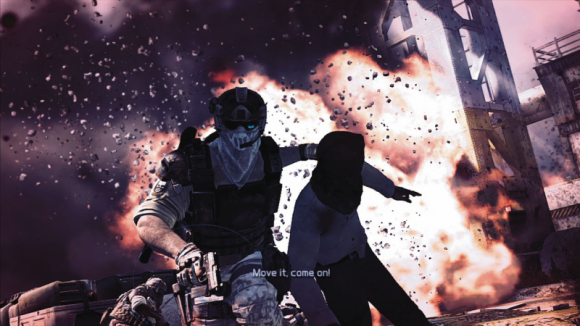 To be clear, all of the mechanics in Future Soldier work. If you’re a fan of the Ghost Recon series, this entry doesn’t disappoint. It may feel less tactically oriented than previous games in a transparent attempt to appeal to wider shooter audiences but accessibility is rarely a bad thing when you’re trying to make the player feel like a badass assassin. The gadgets function beautifully for the most part, from the active camouflage to the sync kill system that lets you mark up targets then call for their simultaneous execution from your squad. The set pieces are all here for everything you’d expect from a team the enemy calls “ghosts”.

What causes the game to fall flat is story telling. It totally lacks of an antagonist and a protagonist in the conventional sense. It wasn’t until about two-thirds of the way through that the game gave me a mission without my team and I even figured out which of the ghost’s I was playing. The characterizing of the team is done through disjointed scenes between levels showing them goofing around in the mess hall or playing with new tech. I never got any sense that these were the same characters I was playing as in the field or that these were individuals with goals or struggles befitting of a major upheaval. The narrative seems to exist in isolated chunks, like a power point that jumbles together the required elements to have a single player campaign without having any heart or soul. 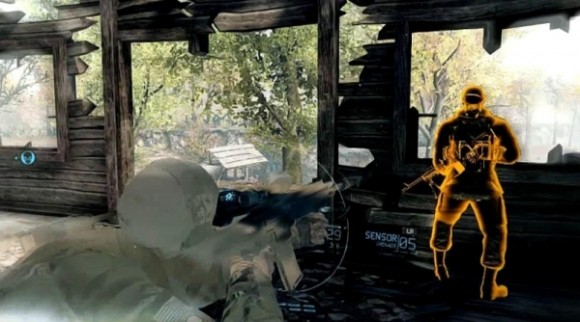 Technically the game is proficient in most areas and hit-or-miss in a few. Most of the gameplay looks good; on par with what you’d expect this late in the console generation. Every once in a while there’s a glaringly bad texture on the side of a truck or rock that kills the framerate of an entire cutscene in what I’m now going to call Medal of Honor syndrome. The sound seems to be missing a few files. I get that stealth kills are supposed to be quiet, but in many cases executions lack any sound at all. Toward the end of the game many of the cut scenes involving an upheaval of the Russian government show fists pounding on tables and dramatic pacing but the only sound heard is mismatched lip syncing. Did the designers just realize the story wasn’t engrossing at all by this point and cut the budget on anything that would maintain immersion in the third act?

But I’ve tolerated a bland story and some technical glitches for the sake of feeling like a badass before. I even liked Medal of Honor. The reason I find it so hard to get into Ghost Recon’s narrative is actually not its bland story and minor glitches. It’s that it completely fails to make the player feel like the badass ghost that he supposedly is. At the end of each level you’re handed a mission report card informing you in what areas the game found you least badass. During the levels you’re given no real option to alter the terms of engagement. It’s clear at the outset whether or not you’re going to be able to stealth into a facility or run and gun the whole way and in the rare instances where I managed to stealth into an area I was meant to be blasting into the guards would suddenly become alerted to my presence for no good reason. Oddly, once a guard is alerted to your presence there is no way to hide again until everyone in the room is dead. In some cases the mission objectives don’t even make sense for a ghost team but you’re asked to complete them anyway because the pacing gods have determined that now is the time for cover based shooting action. Why am I extracting the VIP on this elevated ridge surrounded by enemy soldiers awaiting a helicopter? No helicopter would land with that much heat in the area, and half the landscape is covered in smoke or on fire. Why don’t I just hide in all this nice obscuring smoke and find a new extraction point? But no, I must remain king of the hill gunning down Russians because according to Ubisoft that’s what fun is today. The environments of the cover fights aren’t even interesting or distinct because most of the time you’ll be in your MRI vision removing all color and terrain effects for the sake of viewing enemies through walls. 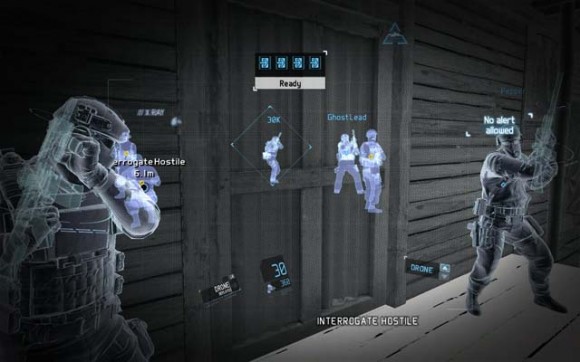 Fun is when in Farcry 2 enemies would whisper about how I could turn invisible, despite my predilection for Hawaiian shirts and lack of superpowers. Fun is when the uncanny true-to-life sounds of the machine guns in Medal of Honor made me reflexively duck my head down below my couch. Fun is when I popped out of the bushes in Crysis, took out a KPA soldier and had disappeared again before his buddies knew whether I was a man or an alien harbinger of death. And fun, Ghost Recon aint.