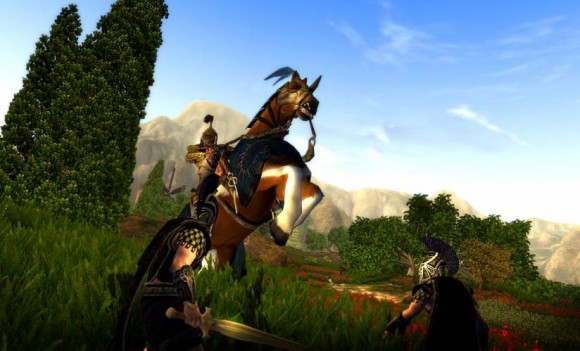 Funcom’s freemium sword and sorcery MMORPG Age of Conan has received a large new update, available now automatically for those who have the game installed.

The patch introduces the House of Crom, an ancient temple built by the Atlanteans and made up of two large dungeons. The largest indoor dungeons created to date the developers claim. There’s plenty of other good stuff in there including improvements, tweaks and bug fixes as well. From the change log:

Update 3.2 introduces the House of Crom, an ancient temple built by the Atlanteans – locked away for thousands of years within the Eiglophian Mountains, undisturbed by the people of Cimmeria. But the temple has recently been defiled by a group of Vanir excavators. Hungry for lost treasures, they delved deep, unaware of the myriad of dangers that have survived the millennia.

House of Crom is made up of two vast dungeons. One social dungeon that supports multiple groups at the same time, and one six man dungeon. These areas are the largest indoor dungeons we have created to date, and there is a lot of great gameplay and encounters crammed into the ancient halls.

Threshold of Divinity is a social dungeon for up to four six-player groups for max level characters with nine separate encounters. From the frozen halls of the dead, where those who died raising the temple sleep the eternal rest, to the ritual chambers of Atlantean priests, the players will unravel a haunting story of eldritch horror and foreboding. Sent to aid the Cimmerians in driving out the Vanir desecrators, they will fight enemies both old and new, solve ancient mysteries, and learn the truth behind the House of Crom and what happened there.

The Vile Nativity, on the other hand, is a six-player group dungeon for max level players. There are seven encounters in all: two of them optional. From the long-forgotten library where the Atlantean scholars once studied, to the treasury room where the wealth of Atlantis was locked away, we are offering players a dungeon rich in lore and storytelling. Those who seek it could perhaps even learn snippets of the Atlantean language for themselves, unlocking even more clues into the history of the fall of Atlantis.

You can find the entrance to the House of Crom in Field of the Dead.

Please note that the first time you enter one of the House of Crom instances it might take several minutes to load the instance. Visiting there after the first time should take considerably less time to load.

You can read more about House of Crom in this article on the official Age of Conan website.

Fixed some memory leaks on the Community Server. This should result in groups and raids not automatically disband as frequent anymore and should also help with disappearing friends lists and guild lists.

Clarified the description of Misdirection found in the mage General feat tree.

Updated the particle-effects for Hellfire Breath to be more in line with the name and description of the spell.

Sound-effects on Hellfire Breath spell have been corrected.

Frozen Hatred’s Chill should now work like other snares.

There is a new quest available in Ardashir Fort called “Ancient Letters.”

Ardashir “Bite of the Dragon”: The quest should now progress correctly when handing in the herbs and berries to Piran.

The Ivory Ravager of Jhil should no longer change color after zoning.

Crafted items should no longer disappear from the tradepost.

There are new inventory items available in the in-game store which expand the inventory space by 97 or 122 slots.

New Veteran Paths to Coast of Ardashir and Paikang have been added to the Veteran Vendor.

Descriptions to all Veteran Path items in the Veteran Shop have been added.

Lowered the Veteran Token Sell Price of Marks of Acclaims and Simple Trophies.

Lowered the re-use time of the Veteran Path to Shaulun by 1 hour.

Options changed in the patcher should now always be saved correctly and not need a restart of the patcher to be applied.

Custom Key bindings should no longer reset when you log out. For this to work correctly you need to let the logout timer finish completely.

The tooltip for the PvP level should now correctly state that level 10 is the highest, not 5.

Hate Rating stats on Raid Tier 3.5 items have been tweaked.

The Bat of Nergal’s health has been lowered by roughly 10%.

The Root spell’s damage element has beenreduced by roughly 50%.

The chat log should no longer be spammed with “Bat of Nergal Died.”

The minigame timer is no longer reset for everyone if another player rejoins the minigame queue.

Fixed an issue that sometimes reset the battlekeep build timers when the servers were restarted.