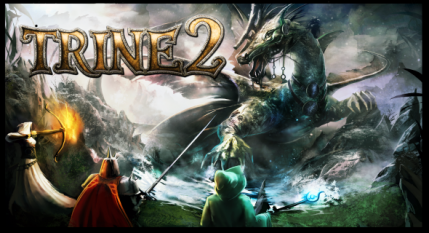 We here at Gaming Dead saw that Trine 2 was on display this years PAX and our group of three had to make the journey to see the what the commotion was about.

Trine 2 is a leap and bound from the Trine of yesteryear. The game has been improved in almost every facet to make the puzzles more engaging, beautiful, and challenging!

The three protagonists from Trine: Wizard, Warrior, and Thief return again to solve strange puzzles and fight monsters. Unlike the first game, there have been some major balancing. The developers saw the glaring over powered flaw with the wizard in the first game (creating objects able to proceed through levels with ease) and made the game only beatable if each and every single character is used. The wizard still creates objects, but can not attack and the created objects are not so easily used to pass levels. The game can be played in a single player format by switching between characters with the correct button, or played with multiple players in a drop in/drop out system.

Graphically the game looks beautiful. Lush vibrant colors, and great water effects drew me into the first level immediately. The foreground and backgrounds mesh perfectly adding a bit more difficulty to the game as you try to search the area for puzzle important items that blend with their surroundings. A couple times i found myself not moving because I was just watching the world move.

Trine 2 comes out on XBLA, PC, and PS3 later this year. Fans of the first game should definitely pick it up, and new puzzle platformer fans  should look into it .