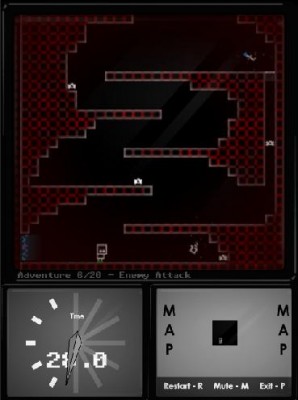 Can you have an adventure in under a minute? You bet your robot ass you can!

K.O.L.M.A.I.M. is a flash game from Armor Games by a one, The-EXP. If you have ever happened to have played K.O.L.M. you should be well advised that this is not a sequel, so stop thinking that crap right now! K.O.L.M.A.I.M. is a game where each level is considered a single, complete adventure which must be completed in under a minute. Seems simple, but there’s a trick! Since each adventure is its own separate thing, power-ups and abilities don’t stay with you. So each ability (such as jumping) has to be regained each time and used that adventure. Seems annoying, but is a very intricate part of the game. You have to be really time efficient when regaining powers and making your way to the end of each level.

The game play is pretty simple, since the buttons are mainly just the arrow keys and the space bar. The very short nature of the game, and the fact that each level is unconnected to the other, this is a great game to waste your time playing and not feel bad if you didn’t beat in one go. The music is also very good part of the game, so turn up those speakers and piss off Jill in the cube next door. Fuckin Jill…

The game DOES slow down a lot on a slow computer, so if you have one I would suggest you play something else, or be a man and get a better computer!