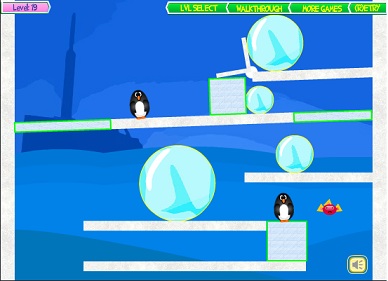 Want to make some penguins fall to their demise? It beats bludgeoning seals!

“Penguin Fun Fall” is a puzzle game by a guy named Keybol about sending a bunch of penguins to their watery demise. Why? Well, since they are being sent to the water, it’s probably due to their lacking the ability to swim. A trait punishable by death in the penguin world!

The game is set up as a physics/puzzle game where the player (aka: you!) must use the power of gravity along with removable blocks, moving squares, and rolling balls to push a bunch of penguins over the edge to the bottom of the screen. There are  25 levels of penguicide, each one more difficult than the last. Each level has a bonus challenge of making one of the falling penguins touch a fish located on the map, as a kind of “last meal” for the damned penguins. Sometimes this is easy, but usually its relativity hard. The game also adds multiple penguins to each map eventually, but this happens a little late for my taste. It’s not super hard, and you may have played games like it before, but it has a few game mechanics I’ve never seen in a game like this, and there’s also a “Plinko” level. I love plinko!

Anyway, check out “Penguin Fun Fall” here for a massive waste of 15 minutes!