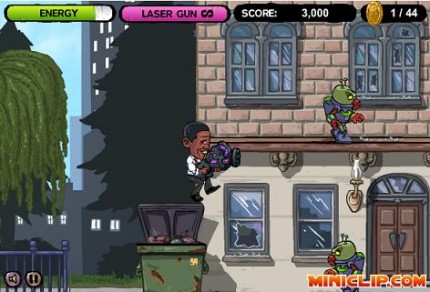 Since its Presidents Day, why not kick some ass…PRESIDENT STYLE!

Over at Miniclip, they have the perfect way to honor our presidents. While the History channel is probably doing there yearly boring old Presidents Day program, Miniclip gives you the chance to BE the president and kill some alien squatters.

“Obama Alien Defense” pits you as current President, Obama, against a horde of alien vagabonds who thought it was just the right time to do a little earth conquerin’, but they didn’t go through “due process” and Obama’s not down with that. So take out your gun and shoot some alien ass. through the major cities of America!

Check this game out here and honor our beloved Presidents with VIOLENCE!