There are a few names that every fan of the Final Fantasy series of games knows: Hironobu Sakaguchi, Yoshitaka Amano, Nobuo Uematsu…Monty Oum.

Oum may not be listed during the credits of any of the Final Fantasy games out there…yet. But having created five successful fan videos pitting characters from the Final Fantasy and Dead or Alive franchises against one another, in a series known as Dead Fantasy, Oum is now a household name for gamers in those fandoms. We caught up with him at the Artists’ Alley at Anime Expo in Los Angeles, CA.

Oum premiered the next three installments of Dead Fantasy at Anime Expo’s Anime Music Video competition on the night of July 3rd, 2009. Oum had previously revealed trailers for Dead Fantasy III, IV, and V at FanimeCon 2009 in San Jose, CA, and premiered “beta” versions of the full episodes at Anime Boston, but it was at Anime Expo that the finished products debuted to an audience of over 6000 people.

To the fans, he’s a wunderkind: at age 28, Oum, a professed high school dropout, creates videos featuring familiar game characters that look like they could have come straight from Square-Enix or Tecmo’s games. Oum’s been working on fanvideos featuring video game characters for the past seven years, but “for putting concepts together, it’s been as long as I can remember,” he says.

In 2006, Oum made his debut as a video game “fanvidder” with his Haloid series, crossing Halo and Metroid. Two months after its premiere, Midway Games contacted Oum and hired him for a job. In September of that year, Oum began work on what would become Dead Fantasy I, initially planning for the series to end after five installments. After its release, fans went wild, practically foaming at the mouth for more. Oum delivered: immediately after completing Dead Fantasy I, Oum set to work on Dead Fantasy II, and in April 2007, he released it to an ecstatic public. Only two months later, Namco Games hired him as a designer/editor, a job he retains to this day.

But prior to Oum’s success with Haloid and Dead Fantasy, Oum created similar videos featuring original characters. “I was never much of a fan artist,” he says, explaining that his first attempts at game-like videos were based off original ideas. “I asked people ‘If you could have any kind of super power, what would it be?’ and I made my videos around that.” But his original videos didn’t get the response Oum was hoping for; “Movies themselves as a medium are meant to be seen,” Oum says, and his original creations weren’t getting seen. So he switched to making videos featuring characters from games he’s enjoyed over the years, and with the massive critical acclaim he’s gotten from them, Oum’s not going to stop anytime soon. He likes and enjoys making the videos, even if the characters aren’t his own.

Nonetheless, Oum has demonstrated his prowess beyond character replication: with the premiere of Dead Fantasy III, IV, and V, the series now has a plot line that’s sure to keep viewers on the edge of their seats. The original idea for Dead Fantasy takes advantage of what Oum calls “consistent character themes.”

According to Oum, Japanese storytelling -not just video game stories- tends to feature two types of guys (good and evil) and three types of girls (beautiful, sexy, and cute). You can look at any of the games from which Dead Fantasy pulls its characters and see Oum’s onto something: from Final Fantasy X-2, we get Yuna, the beautiful one, and Rikku, the cute one; from Final Fantasy VII, we get sexy Tifa (Aerith’s the beautiful one and Yuffie’s the cute one), and as an added bonus, we also have beautiful Rinoa from Final Fantasy VIII and cute Kairi from Kingdom Hearts. The same is true for the Dead or Alive girls.

Oum admits he’s more of a fan of Tekken than Dead or Alive, but he chose to use Dead or Alive characters alongside the Final Fantasy ones due to their more consistent character themes.

The original idea for Dead Fantasy featured only five installments, but the plot has “evolved over time,” Oum says. Dead Fantasy may not originated with a plot, but some people cared about the series having one more than Oum did, and Oum couldn’t let that happen. “The right choice was picking the right characters with the right motivations,” he says. Based on that, maybe we can guess who else might be showing up in future installments? You can try, of course, but Oum might just end up surprising you anyway: “The ability to evolve is more important than being vain about your consistency.”

Vain is something Monty Oum is not. If anything, he’s  humble, and perfectly content with listening to people gush about his creation while he lurks in the shadows. His table at the Artists’ Alley was unadorned and featured only a few printed posters of his CG work, including the Dead Fantasy poster featured above and a special Tifa Lockhart image. Oum himself wandered the Artist Alley when he had time, enjoying the creations of like-minded fans. Oum says that art of all kinds serves as his inspiration. “All of art is around me,” he says.

As a result, some fans would pass by his table and not realize just who Oum was or what he was supposed to be displaying. But it only took a few fans lingering near his table, asking questions, taking pictures, and wearing face-splitting grins while shaking Oum’s hand for others to make their way over and realize just who was behind the simple white table at the end of row C.

It was a different story during the Anime Music Video competition at AX. Cheers from ecstatic fans could be heard throughout the hall. Oum sat in the middle of them, a regular fan amongst thousands. It wasn’t until the AMV emcee called him out after the previews that Oum stood up and received his thunderous applause.

Oum says he was glad to hear it: he enjoys knowing that the fans are reacting to more than just “explosions,” but also to the different aspects of his videos, from the intensely visual worlds to the incredible choreography used in the fights. “I’m always trying to get better as an artist,” Oum says, and having people react to his creations is a goal he continues to keep. To that end, Oum’s passion for choreography is a good thing: his fight scenes are never dull or repetitive, and he takes full advantages of the character themes presented in the source games, altering the choreography to match Gunner Yuna versus Tifa’s hand-to-hand combat style or Rikku’s blades.

But even with a growing fanbase and a great deal of acclaim under his belt, Oum’s not completely satisfied: “The movies are riddled with mistakes. I could edit them all day.” He cites such things as cloth flowing the wrong way or the arms of characters passing through one another when they should be colliding. 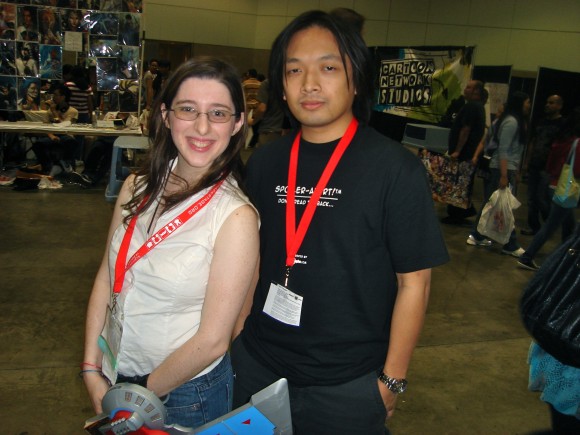 What’s next for Dead Fantasy? Oum says that with the introduction of a plot, things aren’t exactly what they seem. Character motivations -why they are there, why they are fighting- will come into play. “It’s not quite limited to one side versus the other,” Oum says slyly. “For example, are you sure this person is a good guy?” Oum doesn’t reveal who “this person” is, so we’ll be theorizing and re-watching until the next parts come out. Oum says you can watch for clues in the newly-released parts: In Part VIII or IX, something “very unexpected” will happen, but it’s still alluded to in Parts IV and V, if you watch carefully.

Is Oum trying to top his previous creations with each successive release of Dead Fantasy? “I don’t believe in better,” Oum says firmly. “There’s just ‘different,’ and different can be subjective.”

If Oum is concerned about Square-Enix or Tecmo knowing about his latest creation, he’s not sweating bullets over it: Bungie knew about Haloid and loved it, so Oum assumes Square-Enix and Tecmo probably know about Dead Fantasy and “don’t care.” He hopes that whether or not they know about it, he can continue making the series until it’s complete.

Oum is grateful for the astounding fan response, but he asks that they remember that he’s “making them as fast as he can,” and requests that fans be patient. Oum plans to debut Dead Fantasy VI, VII, and VIII at next year’s Anime Expo. “I’m so excited to get to work.”