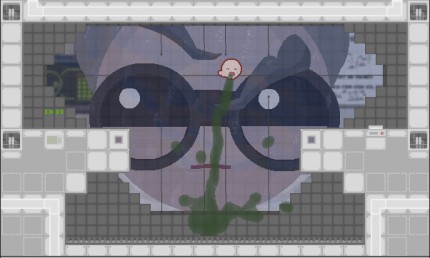 If you’re in need of some classic Edmund McMillen to tide you over until Super Meat Boy arrives, check out his latest frustratingly awesome browser game, Spewer. In it, you play a little pink thing that vomits.

Much like the seismic concussion grenade launcher in Concuss, vomiting is both how you interact with, and move around, a level. You do have a modest jumping ability, but it’s used more for positioning yourself for precision barfing. You can vomit downward to jump farther or fill a passage with your puke to create a swimmable area, among other things. Turns out barfing copiously is a surprisingly versitile and useful ability. Spewer even collects powerups along the way that allow him to vomit several exotic varieties of chunder.

The real star of this game is the creative level design, which is typically excellent McMillen fare, where puzzle-solving ability is almost as important as quick fingers. When you work through the story mode to its interesting conclusion, you’ll unlock a set of challenge levels that test your mastery of the regurgitatory arts.