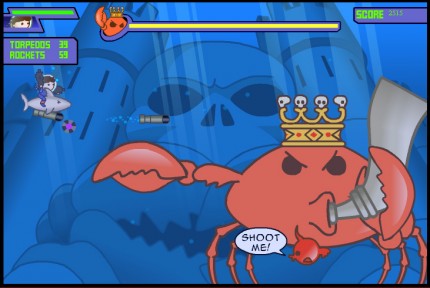 Are you ready for “the most epic boss fight in the history of Flash gaming?”

No, of course you’re not. You can’t handle all this epic.

Ultimate Crab Battle starts at the end of the game, right before the final boss battle. Your character, a girl riding a pissed-off dolphin, is fully powered up with lasers, missiles, rapid fire, and some sort of spinning defensive sphere. All that’s left to do is defeat the Crab King.

The game takes only a couple minutes (and a restart or two if you play it on hard), but the boss’ attacks are imaginative and fun enough to make up for the shallowness and brief playtime.