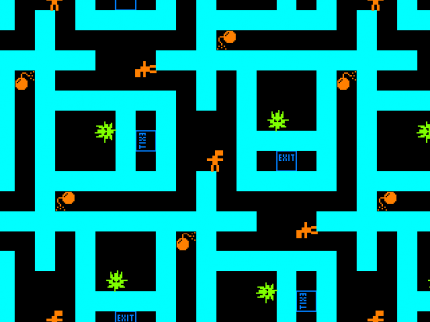 Jumpman is what happens when an Atari 2600 pops a couple tabs of LSD, and has sex with a kaleidoscope.

Check after the jump for a vid of the game in action.

According to its creator, Andrew McClure, the game is a literalistic interpretation of the worlds depicted in Atari-era, 8-bit games:

The hope is to try to make you believe that every 2600-era platformer would have looked like this if only you’d pulled the camera back about 4 feet. Like, every old game had something where you could walk off one side of the screen and suddenly appear on the other, right? What was actually happening there? Did space in the world where Pac-Man lives just happen to loop back on itself every ten feet? What would happen if you just took the camera and turned it a little bit to the right, would you see Pac-Man duplicated every 10 feet stretching off into the distance forever…?

Well, mission accomplished. Now I can’t stop thinking about it!

The game is also damned difficult. Andrew says it was “about as hard as [he] could make it,” and it shows. The slippery controls, precision jumps, and world-rotating mechanic had me pulling my teeth out with pliers in fury. Which I now regret.