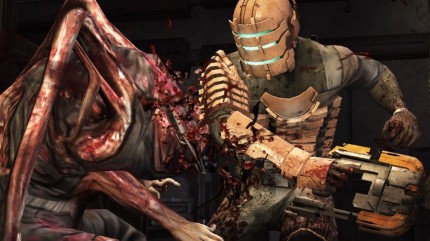 EA recently announced that it is producing a prequel to Dead Space for the Wii called Dead Space Extraction. Read on for more details and deadly blade-arm action!

Dead Space Extraction tells the tale of the events that lead up to  Isaac Clarke’s traumatic and somewhat laborious adventure aboard the USG Ishimura (That guy was one hard working engineer). The story centres around a new heroine who is a part group of colonists desperately trying to escape from the out-break of an infection on the planet Aegis VII, where they are mining ore.  It sticks closely to the premise of the first game, seeing the unlucky colonists fall victim of the mysterious and horrific disease as they try to make good their escape.

The game has been build from scratch for the Wii and sees a shift in gameplay from the third to the first person perspective. EA promises that Extraction will be filled with new weapons, puzzles, and enemies (anything but blade-arm men, please, I beg you!) and that despite the Wii’s reputation for cutesy shovelware there will be plentiful helpings of violence and gore.  Hooray!

The developers,  EA Redwood Shores studio, also plan to take full advantage of the unique Wiimote controls, helped along I hope by the Wii Motion Plus so that some kind of accuracy can be guaranteed. If they use the unique engineer’s cutter weapon that was featured in the original Dead Space, the motion controls might just be perfect. Turning your hand would make it easy to switch between the horizontal and vertical beams. I just hope this is done in a sensible manner that doesn’t involve wrist-straining twists or pointless, frantic shaking.

The most notable new feature, excluding the motion controls, is the introduction of multiplayer co-op. I personally have mixed feelings about this as it really tears away any last remaining shreds of deep space survival horror and places the game firmly into the action genre. Its not lonely out in the big black, you can bring your friends and have a party! A boogie with blade-arms man!

I hope for the sake of Wii owners everywhere that this turns out to be an exciting adult game, and not just a cheap attempt to extend a franchise to a wider market. To me, it is just a shame that the Wii is not technologically on par with the other next gen consoles. Then owners could enjoy the original game and a Wii exclusive and not be stuck nibbling at tofu (e.g. Resident Evil Chronicles) whilst the rest chow down on some juicy delicious steak (e.g. Resident Evil 5).