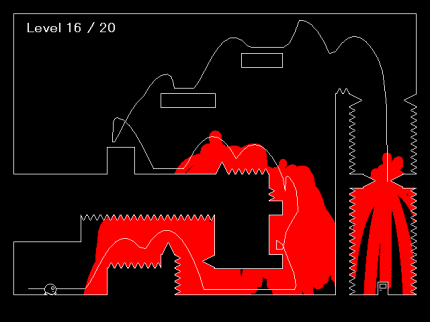 Have you been looking for an excuse to buy a new keyboard? Jesse Venbrux’s new game You Probably Won’t Make It will get you so frustrated that you’ll be breaking your keyboard over your own head in no time. But in a good way.

You Probably Won’t Make It is right. This sequel to Venbrux’s You Made It is HARD.  And what makes it worse is that it’s incredibly addictive.  I can feel it laughing at me every time I land on another spike, mocking me. It’s like when some guy that you’ve been trading smack talk with on [insert competitive online game here] challenges you to a one on one match when the game is over. You just can’t refuse.

It’s a simple game in which you play a little… thing, with feet. You must jump and double-jump over treacherous spikes to make it to a door which leads you to the next level. That’s it. And it’s only twenty levels long. Also, it records where you die and leaves a large blood stain every time. By your twentieth attempt portions of the level will be drenched in red pixels.

You can download it here. I’ve gotten up to Level 10 and it only took me about an hour or so.

Tags: Free, Independent, Jesse Venbrux, Platformer, Time Killer, You Made It, You Probably Won't Make It