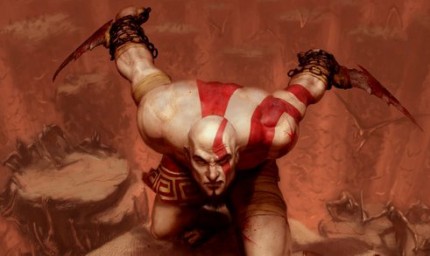 Initial details of the PS3-exclusive epic-brawler God of War 3 have been revealed via a preview in Game Informer magazine.

The magazine confirms that the action sequel will stick to single-player, putting an end to the long-running rumor of a GoW3 multiplayer component.

Here are the full details:

* The franchise will continue beyond God of War 3, but the trilogy will have some kind of resolution.
* Kratos is four times as detailed in the sequel; 20,000 polygons over God of War 2′s 5,000-poly version.
* Players begin the game with many abilities from previous God of War games unlocked.
* New weapons will provide more contrast to the standard Blades of Chaos. The Cestus gauntlets, seen in the trailer, were given as an example.
* Up to 50 enemies on screen (an increase over God of War 2′s 12-15 limit.)
* Enemies will now coordinate attacks, arrange themselves in formations, and jump on Kratos to weigh him down.
* Titans–the massive god-like creatures from previous games–are now dynamic, “living, breathing characters,” rather than background set-pieces.
* Since the gods are angry with Kratos, he now draws his magic powers from a supernatural source.
* Kratos can now control some monsters, such as the Cyclops, as pseudo-vehicles.
* Future DLC packs are seen as a possibility.

God of War 3 has yet to be given a release target.