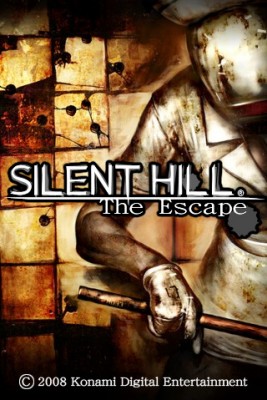 Silent Hill Escape was recently released for the iPhone. I thought I would cash in my pennies and give it a play, so I could review it for you good people.

Chris introduced me to the Silent Hill series last summer when we played through Silent Hill 4: The Room. I loved it!

We also played/slogged all the way through Silent Hill: Homecoming upon its release. This game, though aesthetically pleasing, lacked the subtle feelings of loneliness and despair created so effectively in 4. The story was also all over the place and the monsters were just lifted with from other games with very little new effort to link them to he main characters personal demons or to create anything relevant to the plot. The gameplay was also very challenging and a lot more action based that in the previous titles.

Knowing the state of the series on the next gen consoles I made my app purchase with my eyes open and my expectations suitably low. Apparently not quite low enough though.

The game plays like a rat maze. You wake up in a hospital and start walking around trying to find a way out. The corridors are dingy and suitably silent hill-esque, but completely devoid of anything you can interact with. You have a little maze map in the top right hand corner (see screen shots below) and have to walk from the red dot to the green dot, finding items floating the the corridors, like batteries for your flashlight. Or the key for the elevator door? Uh, okay. (Yum, cheese!)

You move by pressing up, down right or left on the touch screen and holding that direction. This is makes navigating the maze very difficult as you are fixed in position in the middle of the corridor in the first person perspective.  Don’t think you will be peering cleverly around corners to check for danger. Oh no,  it’s set out like a grid so you have to stand opposite the hall and turn to look down it.

This makes avoiding enemies exceedingly difficult. If you happen to walk into one that was lurking round the corner then its curtains for you in two hits (retreating backwards is slow, and forget about pulling off a 180 in time!).

The only action you can make is to shoot your gun. You have a limited number of bullets so you don’t want to waste them. And you will, because annoyingly, the touch screen controls sometimes decide you are trying to fire your gun when you want to walk forward.

Aiming  is done by tilting the phone until the crosshairs are over the part of the enemy you desire to harm, my personal preference for most of them was the head, when there was one. This is a bit tricky to pull off and hold steady; seriously don’t try it on the bus, its a lost cause. Also, you need to be careful that your tap-to-fire doesn’t change your aim, as you can miss at the last minute. (Squeak!) Then it’s back to the start of the maze for you.

Sadly, that seems to be it for gameplay and woefully it was covered in five shorty paragraphs. There is disappointingly little to speak of in the way of story: “Where am I?”. Oh god, the originality is overwhelming me.

Overall, I was left with a feeling of “What is the point?”.  For $7.99, one of the more pricey games for the iPhone, I would have expected a bit more interest and depth. If it was $2.99 then I might have been more forgiving, but clearly Konami is attempting to cash in on Silent Hill brand. Fans of the series should avoid this game like they would the plague, Pyramid Head, or Silent Hill: Homecoming!