The Wii Gets Fragile, a Game That May Not Suck 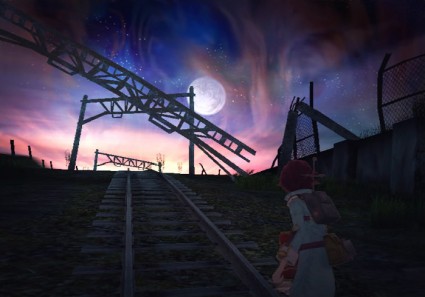 Zack and Wiki: Quest for Barbaros’ Treasure. That was the last time I touched my Wii (teehee). I haven’t seen much coming out for the Wii in a long while that wasn’t uninteresting, terrible-looking, or a collection of minigames. I am seriously sick of minigames.

Then came Fragile, an action RPG from the makers of Baten Kaitos, and some other good games you’ve never heard of. What first struck me upon watching the trailer, is the cohesive style. This game is artistically very well designed. It’s almost hard to tell it’s for the Wii.

[Video after the jump.]

The premise of the game is another plus. It’s set in a post-apocalyptic near future, where the world is covered in a dense, pop-up obscuring fog and it is never day. Most of the population has disappeared, or been killed. There are ghosts and demons tossed in there as well, but though this sounds fairly identical to Silent Hill, the game isn’t a survival horror.

And the gameplay sounds promising too. The Wiimote is used for some inventive environmental interaction, including as a flashlight to illuminate objects and discover hard-to-see enemies, as a metal detector to find buried metal things for some reason, or even as a directional microphone.

It’s not all apple pie and rainbows, though. It’s a bit saccharine-looking, and the trailer is plagued by the kind of typical japanese love ballad you might see at the end of every anime ever. If you watched anime that is. Which you don’t, because you’re too cool.

Fragile, which is actually titled Fragile: Farewell Ruins of the Moon, has potential. Let’s hope that Bandai Namco deem it worthy to be released in the US, at the very least, so I can find out how much it secretly sucks.

As an added bonus, if you’re a fan of boobs, you will probably appreciate the half-naked girl in the trailer. I, of course, didn’t. My girlfriend won’t let me.